Annemiki Bok is a renowned Dutch painter who both lives and works in a de-consecrated church in a village of Espel, northeast of Amsterdam. Her parents were among the “pioneers” who first settled and farmed land known as the “Polder” which had been reclaimed from the North Sea. As a child, she appreciated the mission that had been entrusted to her family, and pays tribute to those roots in the color and light she uses in her current work.

Having studied both biology and studio art as a young woman, Annemiki took a decisive turn, however, when leaving the easy familiarity of her scenic homeland to resettle in Portugal for eight years. It was there that she learned to be entirely self-sufficient, and to place her “own feet on the ground”. It was also in Portugal where she came into her own as an artist, spurred on by the success of her first sales.

The space in which she works is lit by enormous windows set into a high pitch roof. What once housed a Catholic congregation gives the artist ample room to see her emerging work from many angles, and to craft each new canvas as one among a whole community of other works. A simple wooden armchair allows her to sit back at a considerable distance from any single canvas and assess that picture in the context of other works in progress. The light is such that visitors to Annemiki’s studio can see her paintings almost as if out under an open sky.

The artist’s creamy palette breathes both light and life into her images. Whatever their size, her scintillating surfaces align her with a long and venerated tradition of painting in Holland. Thematically, the low horizons and stunning renditions of the variable Polder sky recall the work of the great Dutch 17th century landscape painters. A symmetrical alley of tall trees, retreating towards the center of the picture, might be seen as the work of “a modern Meindert Hobbema”, for example. Yet Annemiki also uses the saturated, brilliant colors and simplistic forms we know from the Dutch color field painters of the 1960s, and Kees van Dongen, specifically. Further, much like Isaac Israels, Annemiki Bok sometimes brings her reverberating, amorphic shapes into calibration with what is linear.

Recently, Annemiki Bok has added a new dimension to her work: finishing paintings with the application of square pixels that speak of the digital age. Since such graphics serve to pull the viewer’s attention back to the two-dimensional, the artist capitalizes on a push-pull between what is portrayed according to the hard-and-fast rules of perspective and a device that animates the surface only. By partially veiling the motif with a soft white wash, the liberal drip technique she uses in some of the most recent portraits and landscapes does much the same thing. Ultimately, then, her paintings find their dynamic in the tension between the representational and the abstract.

Regardless of subject —portrait, landscape, still-life, folly—every canvas is creamy with thick impasto: paint applied only with a heavily loaded palette knife. Collectively, the works impart a sensation that is joyful, but they also lend themselves to varied interpretations, depending both on the space around the pictures and the choices of the people who hang them. Bok writes to her viewers and patrons: “Don’t look for the work of art; Let it find you”. It comes as no surprise that she likes to hand-deliver work to potential clients and consider the optimal place in which they might hang it. For if, as she writes of her women’s portraits, “a smile is a conversation without words”, so, too, does the collector “speak” through his able choice and display of fine objects.

Annemiki Bok works at a highly disciplined, but energetic pace, at one with her work and her role as an artist. Painting, she says, is as much a part of her life as is breathing, and she works to bridge the senses, working with what she alludes to as “the smell of the wind and the silence of water”. Her new work is indeed a visual feast. 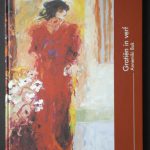